“Ba Gua” 八卦 means “Eight Trigrams”. A trigram is a group of three horizontal lines stacked on top of each other. Chinese Metaphysics identifies eight such trigrams and they form one of the cornerstones of Classical Feng Shui. In fact, the firm grasp of the Eight Trigrams is indeed mandatory to understanding how Feng Shui formulas are developed and interpreted.

Each one of these eight Guas stands for a multitude of connotations and meanings within the context of Feng Shui – and indeed in Chinese Metaphysic s itself.

The Eight Trigrams in Balance

Everything in Chinese Metaphysics is about balance – Feng Shui is no exception. Since the universe around us is in constant motion it is important to restore balance when we have too much or too little of one particular element or phenomena.

Each Trigram has its counterpart. Together they complement each other and hold each other in balance. Qian Gua is pure Yang and complements Kun Gua, which is pure Yin. Li Gua – Fire – is held in balance by Kan Gua – Water. Dui Gua, Marsh land, is the exact opposite of Gen Gua, depicting Mountains. And lastly, Xun Gua, Wind, is considered the opposite of Zhen Gua, Thunder.

NOTE: You might be familiar with the depiction of the Ba Gua – it can often be seen at the doors or windows of Chinese houses and offices and frequently has a mirror inside. Most people assume that this is a Feng Shui remedy to ward of evil spirits. It is, however, only a cultural icon that has nothing to do with Classical Feng Shui.

Each of the Eight Trigrams / Ba Gua represents a multitude of natural and manmade phenomena. The following tables give a very brief overview of the most basic meanings of each Gua. 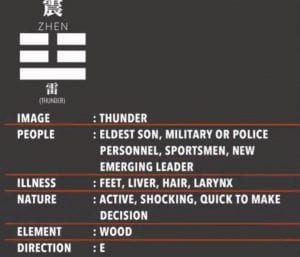 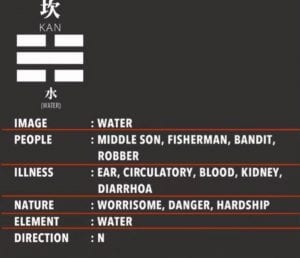 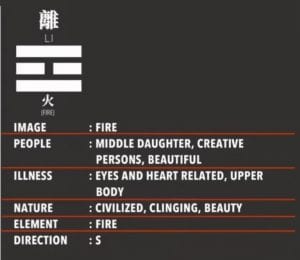 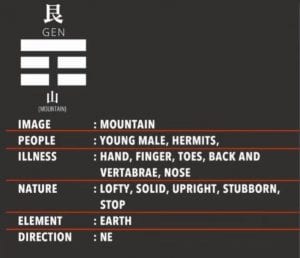